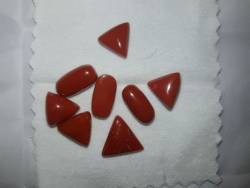 APROX 600/- PER CARAT DELIVERY AT HOME IN INDIA

Red Coral Gemstone The Red Coral Gemstone also known as Praval or Moonga is the Gemstone of Mars/ Mangal as per Indian Vedic Astrology. Mars is the planet of energy, vitality, blood circulation and ambition and the Red Coral is worn to boost the energy of Mars in the horoscope. In the Planetary hierarchy of the 9 planets, Mars is the God of warfare and is the commander of the armies of the Gods. Red Coral is a calcareous, skeleton-like deposit of the coral polyp - a tiny invertebrate that dwells in quiet waters and is found at depths ranging from 20 to 1000 feet. Top 10 Red Coral benefits, Moonga Gemstones benefits Here is the list of the top ten Red Coral Gemstone benefits from the point of view of Vedic Astrology and Ayurveda - The first benefit of the Red Coral/ Moonga Gemstone is victory over enemies and adversaries. Since Mars is the god of warfare it gives the necessary courage to overcome obstacles and enemies and ensures victory for the individual. - The Red Coral benefits in overcoming procrastination and laziness and gives the impetus and the individual to take tasks to their logical conclusion. It helps in overcoming delay. - Another powerful benefit of the Red Coral is its impact on the mental health. Since it is a robust gemstone it helps in overcoming symptoms of listlessness and mental depression. It gives energy, vigour and hope. The red coral also imparts courage and helps in overcoming fear and nervousness. It is a great gemstone for boosting self esteem. - One of the best benefits of the red coral is its miraculous effects of healing. It helps in eruptions of the face, boils, acne, skin ailments, it purifies the blood and guards and protects against cuts, wounds, bruises and injuries. - Those who have an adverse position of Mars in the horoscope leading to temperamental issues, anger problems, and lack of patience find a suitable improvement in these conditions after wearing the Red Coral Gemstones. - Those who have Manglik dosha in their horoscope leading to challenges in interpersonal relationships should wear a Red Coral after a thorough Astrological analysis of their birth chart. If suitable one can expect many benefits from the Red Coral especially in the relationship sector. - Individuals in professions such as army, armed forces, police, doctors especially surgeons, chemicals, weapon manufacture or business, scientists, realty business find the Red Coral to be especially effective and beneficial. - The Red Coral provides strong protection against evil eye, hexing and black magic. - Those people who are in considerable debt should wear a Red Coral after analysis of position of Mars in their birth chart. Mars and its energies help in debt repayment. - The Red Coral represents Mangalya Balam, Strength of Marriage and long life of the spouse. It protects women from widowhood and should be worn after proper astrological analysis.